A conversation based on John 3:16-17 and written by Rosemary Broadstock and Ann Scull. 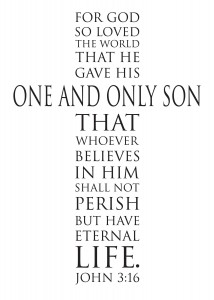 A: ‘For God loved the world so much that he gave his only Son, so that everybody who believes in him may not die but have eternal life’.
B: But that’s not fair!!! What about the likes of Hitler and Stalin – the people who start terrible wars and cause the death of millions of innocent people and cause the destruction of whole countries which take decades to rebuild.
A: But God has shown us how much he loves us – it was while we were still sinners that Christ died for us.
B: But that’s not fair either!!! Does that include the people who dominate powerless people? What about those who rip off the system and make us all pay more? What about people who are cruel?
A: This is what love is: it is not that we have loved God, but that he loved us and sent his Son to be the means by which our sins are forgiven.
B: Hey, come on, this really isn’t fair!! That can’t possibly include the thieves and the murderers, the people in our jails, the criminals, the liars and the cheats, the ones who abandon and mistreat their children and families, the ones who fight and drink too much.
A: Absolutely nothing will ever be able to separate us from the love of God which is ours through Christ Jesus our Lord.
B: But its still not fair!!!! What about the people who are self satisfied and thoughtless? What about those who gossip and are jealous, the ones who are selfish and lack compassion, the ones who break promises, the ones who are always critical, the ones who carelessly hurt other people’s feelings….. Come to think of it – it’s all of us really, isn’t it?
A: This is how much God loved the world: He gave his Son, his one and only Son. And this is why: so that no one need be destroyed; by believing in him, anyone can have a whole and lasting life. God didn’t go to all the trouble of sending his Son merely to point an accusing finger, telling the world how bad it was. He came to help, to put the world right again.