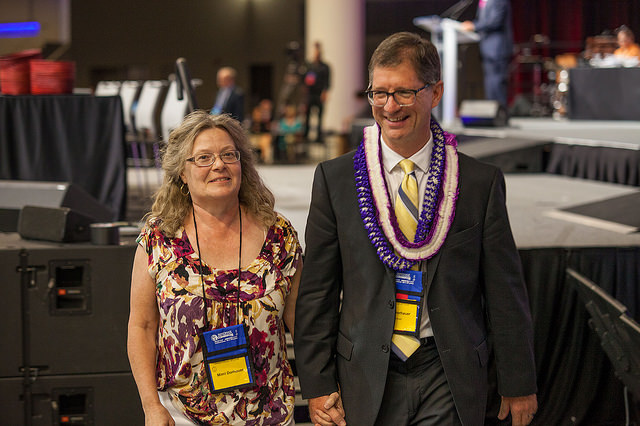 Jesus promised to be with us when two or three gather. And boy, do we need his presence. Being a UCC congregation is not easy. You might as well say “where two or three gather you will have about five very high-profile opinions.” On Sunday, August 23rd, the Rev. Daniel Haas and Tommy Gaskamp will share their current experiences at events in the Wider Church. In June the South Central Conference had their Annual Meeting in New Orleans and General Synod was later that month in Cleveland, Ohio.

Here is a glimpse into how things can go, when our extended church family gathers, written by Micki Carter:

The Rev. John C. Dorhauer was elected general minister and president of the United Church of Christ with 89 percent of the vote during General Synod 2015 Monday, June 29 at the Cleveland Convention Center — but not without voices of dissent. Frustration with a nomination process that brought yet another straight white male candidate for leadership of the church spilled over on the plenary floor during the vote.

As soon as the debate on Dorhauer opened, the first speaker set the tone. The Rev. Graylan Hagler of Plymouth Congregational UCC, Washington, D.C., charged that the nomination speeches for Dorhauer were “the most misjudged and misguided I’ve ever heard. (…) I don’t need a white male to advance me. I have my own worth — without the need of someone with white privilege to give me value.”

The Rev. Anna Humble, an association minister in the South Central Conference, added, “I cannot, I will not, I do not believe there is not one among us a woman who is qualified to lead this denomination. What face are we projecting to the world about who we are?”

The Rev. Alice Hunt, president of the Chicago Theological Seminary, then took the floor. “I served as one of eight women on the search committee. (…) Our committee was tasked to find the very best person to serve as the next General Minister and President for our beloved United Church of Christ. The call for applications was not a call for all women who sensed a call to this important work. The call was for applications from all persons who sensed a call. We received applications from a diverse and interesting pool of applicants. We followed a predesigned and transparent process following our credo, which we had agreed upon in advance. Just because our committee selected a straight white man does not mean our work was sexist or racist or hetero-normative. The eight women on this committee have spent a lifetime overcoming institutional male privilege. We fully support the nomination of John C. Dorhauer.”

The testiness of the delegates reached a point where one asked the current leader of the church, the Rev. Geoffrey Black, to offer a prayer to bring the discussion back to a spiritual footing. He reminded the assembly, “We are on holy ground, in sacred space.”

After the result of the balloting was announced, Dorhauer and his wife, Mimi, were invited onto the stage to receive the applause of the delegates. As they walked through the hall, receiving handshakes and hugs, he stopped long enough to evaluate all that had transpired that afternoon.

“I am grateful to be part of the United Church of Christ where voices of dissent are heard — with love and compassion — and where all voices are welcome!”