The deadline for voter registration in Texas is fast approaching on October 9th. Please check with the secretary of state that you are properly registered. Why would a pastor have to remind me of that? Church is not supposed to be political! Well, I am following the example of the Apostle Paul reminding the Romans to be responsible citizens:

“Be a good citizen. All governments are under God. Insofar as there is peace and order, it’s God’s order. So live responsibly as a citizen. If you’re irresponsible to the state, then you’re irresponsible with God, and God will hold you responsible. Duly constituted authorities are only a threat if you’re trying to get by with something. Decent citizens should have nothing to fear. Do you want to be on good terms with the government? Be a responsible citizen and you’ll get on just fine, the government working to your advantage. But if you’re breaking the rules right and left, watch out. The police aren’t there just to be admired in their uniforms. God also has an interest in keeping order, and he uses them to do it. That’s why you must live responsibly—not just to avoid punishment but also because it’s the right way to live. That’s also why you pay taxes—so that an orderly way of life can be maintained. Fulfill your obligations as a citizen. Pay your taxes, pay your bills, respect your leaders.” (Romans 13, The Message)

The greatest danger to our system of government is when citizens do not do their part and the most formidable thing you can do to fulfill this commandment is to vote. You know the consequences of what happens when you don’t: 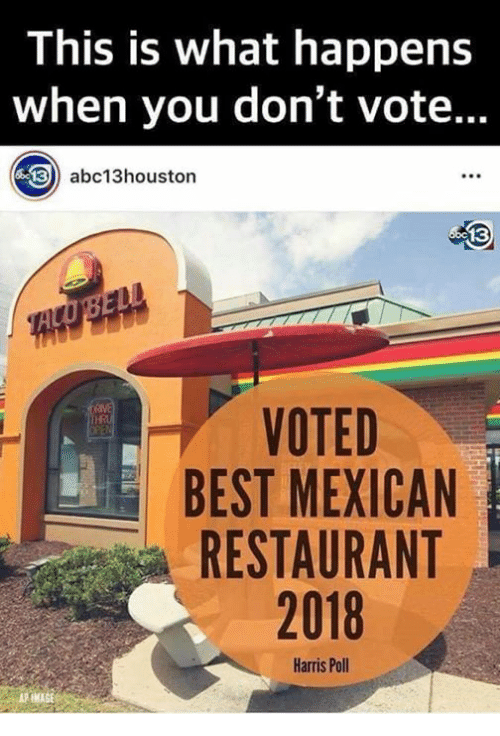 There is a biblical example of that as well. If you don’t follow Romans 13 and check your voter registration you may end up with worse than Taco Bell – the beast of Revelation 13:
“The Beast had a loud mouth, boastful and blasphemous. It could do anything it wanted for forty-two months. It yelled blasphemies against God, blasphemed his Name, blasphemed his Church, especially those already dwelling with God in Heaven. It was permitted to make war on God’s holy people and conquer them. It held absolute sway over all tribes and peoples, tongues and races. Everyone on earth whose name was not written from the world’s foundation in the slaughtered Lamb’s Book of Life will worship the Beast.”